Below is a recap of the first three parts of Barefoot Manhattans, originally published on Bourbon Veach.

Rosemary and I both love Manhattans, so much so that we decided to start studying them. We will be breaking them down into their parts to examine how each one works and documenting our journey along the way. We started off by visiting Buffalo Trace Distillery recently to learn how bitters are made. We both knew that bitters were a crucial component of our favorite cocktail, but we weren’t exactly sure what went into making them. More on that in a future post.

After talking about this idea for months Michael Veach suggested that we start with the whiskey rather than the bitters, as that’s how we typically make our Manhattans at home. I’m no bartender to be sure, and as I recently learned at a cocktail class at the Jim Beam Urban Stillhouse you’re supposed to use your cheapest ingredients first in case you make a mistake. But the way I make my Manhattans at home is whiskey, vermouth, bitters, shake, pour, cherry.

We started off our study on a Friday night with a back yard cookout followed by cocktails. We pulled out over a dozen bottles of whiskey with one goal in mind: determine whether we like bourbon or rye whiskey better in our Manhattans. Here are the first three parts of our multi-part study. 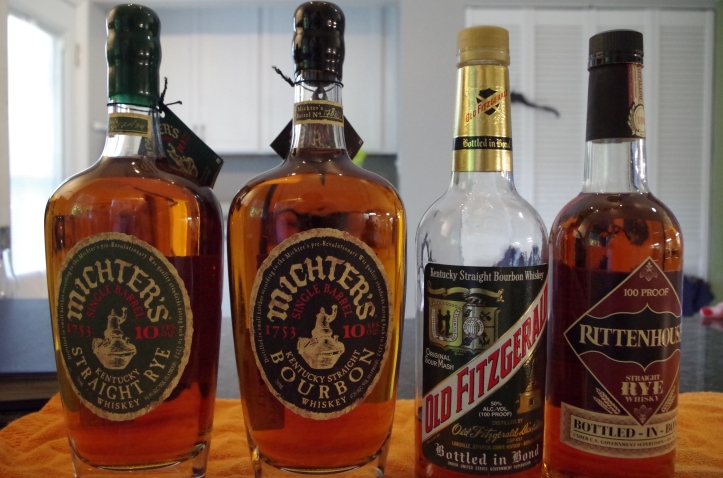 In Bourbon Country Manhattans are often made with bourbon, though many mixologists prefer a a bolder and spicier rye whiskey. The first part of our project was dedicated to determining which we preferred for our home mixology experiments.

We used two 10 year Michter’s whiskeys – bourbon and rye – and two bonded Heaven Hill products – Old Fitzgerald and Rittenhouse. The logic behind this was that we wanted to try different mash bills and proofs, though in retrospect maybe age was a greater consideration here than we thought it would be. It definitely warrants further investigation as we move forward.

Here are some of our notes from that evening:

We decided we both like rye whiskey in a Manhattan because of the depth and complexity of flavor it brings to the mix. To be sure, I will take and even enjoy just about any Manhattan you hand me. Age and proof seem to make a huge difference, though, and we realized that old attitude of mixing cocktails with bottom shelf whiskey is bunk. But we’re going for what works the best, and for Rosemary and me it’s whiskey forward and made with rye. 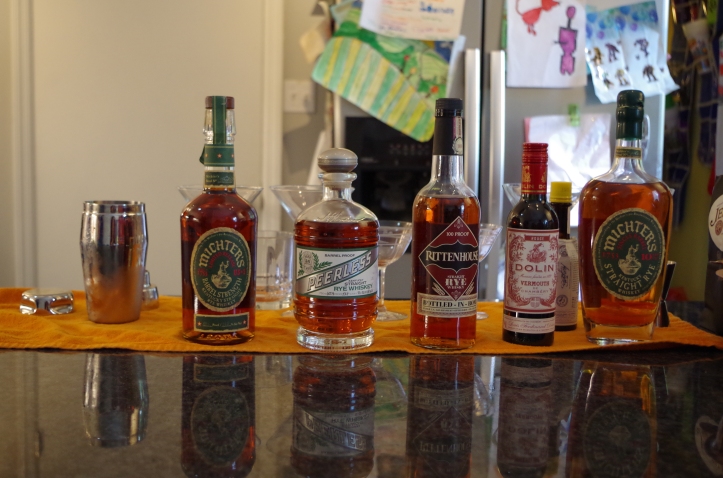 After concluding we both prefer rye whiskey in a Manhattan, albeit barely, we set out to determine which rye whiskey would work best.

For this session we started off with a counter full of rye bottles and a drive to find the perfect rye. After our last session we both concluded that we like rye whiskey better than bourbon in our Manhattans, and the Michter’s 10 year rye was the clear favorite of the lineup. We had been told on numerous occasions that we would love Rittenhouse in our Manhattans if we used Dolin instead of M&R, so we decided to keep that one in the lineup. We also added the new Kentucky Peerless Rye and a barrel strength Michter’s rye to the lineup and got to shaking.

We kept the same basic recipe this time: large side of the jigger of rye, small side of vermouth, two dashes bitters, shake with ice and strain then add a cherry. Again, we’re going to be looking at variations on this in the future, but right now we’re working on perfecting the bones of the cocktail as we see how the different parts interact with each other.

Here are our notes from that evening:

Somehow proof and barrel entry proof were the standout factors here. If I recall, Michter’s is on the lower end of barrel entry proofs as well, so there may be something to this. The Michter’s Barrel Strength Rye was the clear winner tonight, but the surprise runner-up was the Kentucky Peerless rye. These will likely be our two top choices going forward with the study. What we’ve concluded at this point is: 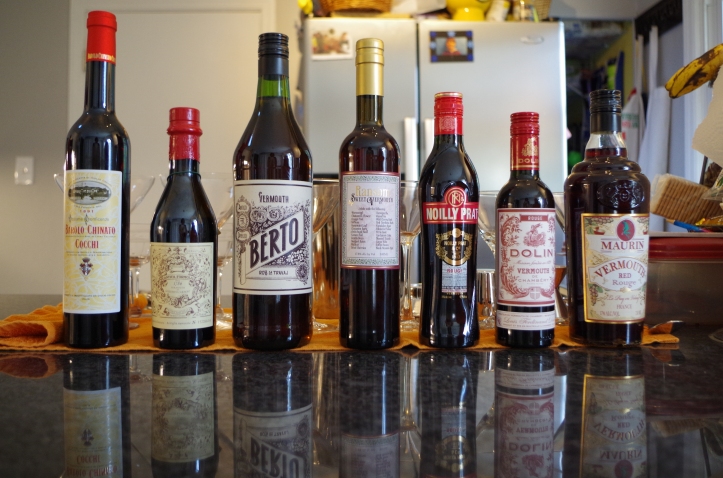 In our last installment we both decided we liked the Michter’s Barrel Strength Rye the best, so that’s what we will be using as our base from here on out. We’re still using the same base recipe: large side of the jigger of rye, small side of vermouth, two dashes bitters, shake with ice and strain then add a cherry. This time we are focusing on vermouths.

We started off by trying 8 different sweet vermouths and kicked one out because neither of us had anything good to say about it. Here are the notes on the other 7:

Because our top two favorites out of this lineup were Italian (Martini and Barolo) we decided to break the vermouth portion of the study up further. We tried all four Italian vermouths this time, we will do French vermouths next time, and then we will narrow down our favorite from the top two of each.

Sweet but not overly so. Very balanced with a nice amount of spice. Light and refreshing herbal with a good mouth feel.

Strong but not overwhelming spice. Sweet but balanced with a hint of citrus.

Great first impression – chocolate and licorice – but then the licorice takes over and become overwhelming.

A very nice intro but then the spice becomes overwhelming. Pronounced lemongrass notes.

After all the feedback we’ve received about our choice of vermouth early on, the old standard Martini & Rossi is sure hanging in there. Rosemary and I both liked the Martini & Rossi and the Barolo Chinato Cocchi the best out of these four. Rosemary slightly preferred the Barolo and I liked them both equally, so these are the two that will advance to the final round after we taste the French vermouths in the next round.

This study was originally published on bourbonveach.com. We have received lots of feedback from the bartending community about our choice to shake instead of stir our Manhattans, and indeed that is something we will be looking into at a later time. The next installment, which examines French Vermouths, will be live on bourbonveach.com on September 8th. Rosemary Miller also contributed to this study.