I have been studying bourbon and cigar pairings with Michael Veach and Wayne Klawier for several months now. It all started in a conversation with Michael Veach about my beliefs most people making recommendations are basing them on faulty information. Nearly everyone I talk to recommends pairing a full-bodied bourbon with a full-bodied cigar and vice versa. In my experience when you have strong characteristics paired with strong characteristics they compete for your attention instead of complementing each other.

What I have always recommended is pairing a less full-bodied bourbon with a more full-bodied cigar and vice versa. But I discovered after starting this research there was another layer- proof plays a significant role in whether or not your pairing will be successful. Lower proof bourbons, as it turns out, are generally better for pairing with cigars.

I recently decided to try the lineup of special Four Roses releases, some of which are review samples provided by the distillery, with a special release of cigar. The bourbon lineup included:

I paired it with a 2015 TAA Exclusive My Father La Antiguidad 6×50 box pressed toro. The cigar had noted of pepper, maple syrup, and nuts.

While each of these was a nice pairing in its own right, the last bourbon was by far the most enjoyable. This is surprising to me since the proof is on the higher side, but it is very well balanced overall and made for an enjoyable pairing. 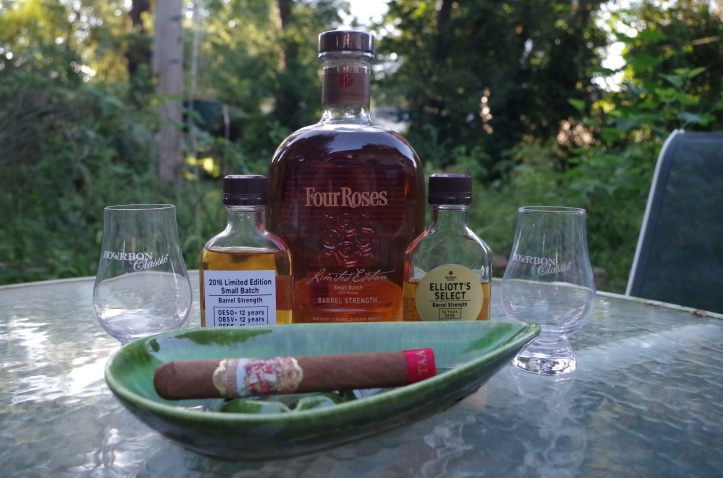