“Come, grow old with me. The best is yet to be.” -Four Roses Historian Al Young quoting a sundial that once stood on the Four Roses grounds. It has recently be rediscovered.

The Kentucky Bourbon Festival is in its 25th year. Every year it grows larger and more spread out than ever before- it originally began in Bardstown, Kentucky but now includes multiple events all over the state each year. One of those events was Let’s Talk Bourbon at the Four Roses Distillery in Lawrenceburg, Kentucky.

Guests were greeted with cocktails and a breakfast spread so amazing that when I told people I would be attending the event they would wax poetic about it. They weren’t exaggerating. Fruit and pastries complimented biscuits and gravy, eggs, grits, bacon, sausage, and more.

But the real meat of the program was the talk, which covered everything from history to daily operations to the chemistry of yeast. Al Young, Four Roses’ Bourbon Historian, talked about the history of the brand starting with Paul Jones and the purchase of the current distillery. The distillery has a growing archive of historic documents, advertisements, and other paraphernalia, which begs the question- when will there be a permanent archive display at the distillery?

Ryan Ashley, Director of Operations at the distillery, also spoke about the current expansion projects in the works. Both the Lawrenceburg distillery and the Cox’s Creek warehouse locations are undergoing a $55 million expansion. A massive bottling line will open in Cox’s Creek, while Lawrenceburg will expand from 4 million proof gallons per year to 8 million proof gallons per year. The non-GMO corn will continue to be sourced from Greensburg, Indiana. And the new fermentation tanks will be made from Douglas Fir, the next best thing to cypress. Keeping the brand consistent isn’t easy, but Four Roses has a strong commitment to doing so.

Then Master Distiller Brent Elliot took the stage. Elliott discussed the chemistry behind the art of distillation, a topic you don’t get to hear about very often. “All reactions in chemistry are a function of temperature,” he said, speaking to the various ways in which temperature has an influence on the overall product. This is the main reason the warehouses in Cox’s Creek are single story and painted white- because of temperature. He also explained the sour mash process in chemistry terms- the purpose is to create a low, acidic pH so the environment is hostile to bacteria and hospitable to the yeast.

Guests were invited to ask questions throughout the presentation. Then this year’s Limited Edition Small Batch was passed around for a toast and guests had the opportunity to choose from additional cocktails or a distillery tour. Elliot was stationed outside the gift shop signing bottles after the program was complete.

I highly recommend this program for the Four Roses superfans out there. It’s a nice way to learn all about the history as well as the current operations, and Brent Elliott does a nice job of explaining the science behind what’s happening inside the distillery. 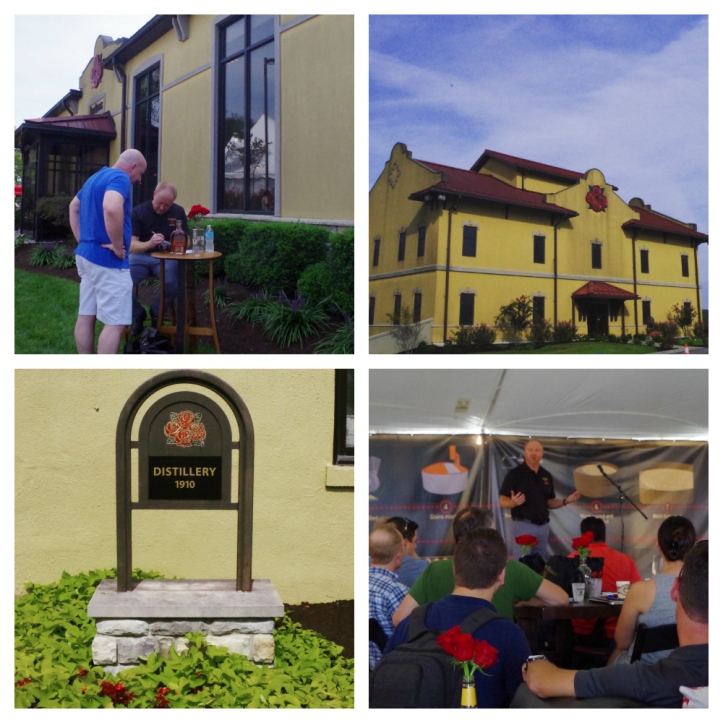 Check out my latest from BourbonVeach.com here

Check out my latest from The Whiskey Wash here

Check out my latest from Alcohol Professor here